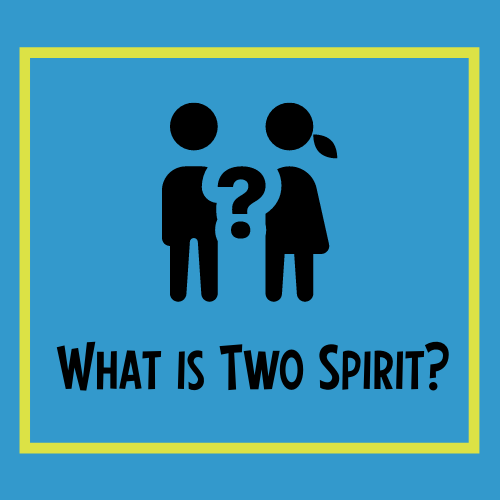 What does it mean to be Two Spirit?!

“Two-spirit” is a term used by some Indigenous people to describe their sexual, gender or spiritual identity, and refers to a person who identifies as having both a masculine and a feminine spirit. They walk between being feminine and masculine. As an umbrella term (a term that many different other terms may fall under) it may include gender variance and sexuality preferences, including people who might be described in Western culture as gay, lesbian, bisexual, transgender, etc.

This video does a great job explaining what two spirit is: https://www.youtube.com/watch?v=A4lBibGzUnE

The creation of the term “two-spirit” was proposed during the “Third Annual Inter-tribal Native American, First Nations, Gay and Lesbian American Conference”, held in Winnipeg in 1990 (GO CANADA!). The term is a translation of the Anishinaabemowin term niizh manidoowag, two spirits. Two-spirit people may also use terms from their Indigenous language to describe same-sex attraction or gender variance, such as winkt (Lakota) or nàdleehé (Dinéh). Some Indigenous languages do not have terms to describe sexual identities such as gay, lesbian, or bisexual. Many Indigenous languages are verb-focussed, and describe what people do rather than how they identify.

There are no comments for this doc yet.